Our game-changing new range is nothing short of a quantum leap in excavator development. Designed around you, these Next Generation excavators will totally transform your job sites, with the new 320 Next Generation Excavator providing lower cost of ownership and fuel burn, the new 320 achieving higher levels of productivity and the new 320 delivering unrivalled performance in the toughest applications. So get ready to witness the revolution of an entire industry and rewrite the rules of operation.

Technology boosts efficiency by up to 45 percent

The new Cat 320 and 323 boast the industry’s highest level of standard factory-equipped technology to boost productivity. Both models are equipped with integrated Cat Connect Technology, which increases operating efficiency by up to 45 percent over traditional grading operations.

Fuel savings reaching up to 20 percent

The efficient Next Generation machines consume up to 20 percent less fuel than the previous, corresponding models. New Smart mode operation automatically matches engine and hydraulic power to digging conditions, optimising both fuel consumption and performance. Engine speed is automatically lowered when there is no hydraulic demand to further reduce fuel usage.

Maintenance costs reduced as much as 15 percent 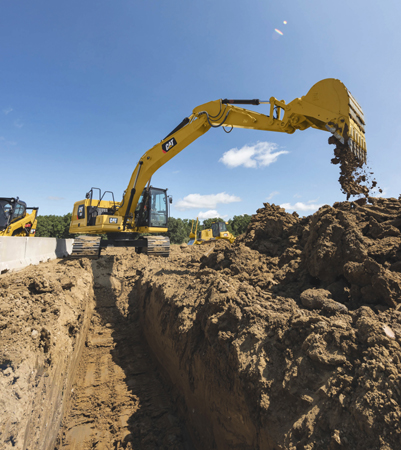